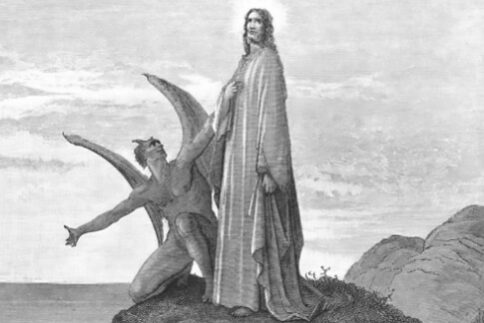 Lent begins with a reflection on the Temptation of Jesus in the wilderness. The Church assigns temptation stories to the beginning of Lent because temptations come to everybody, not only to Jesus, and we seem almost genetically programmed to yield to them. The first reading describes the ancient Jewish ritual of presenting the first fruits and gifts to God during the harvest festival to thank Him for liberating His people from Egypt and for strengthening them during the years of their trials and temptations in the desert.

The Responsorial Psalm (Ps 91), points to Satan’s third temptation of Jesus in the desert as recorded in Luke’s Gospel. In the second reading, St. Paul warns the early Christians converted from Judaism not to yield to their constant temptation to return to the observances of the Mosaic Laws. He reminds them that they will be saved only by acknowledging the risen Jesus as Lord and Saviour. Bible scholars think that the graphic temptations of Jesus described by Matthew and Luke in their Gospels are the pictorial and dramatic representations of the inner struggle against a temptation that Jesus experienced throughout his public life. The devil was trying to prevent Jesus from accomplishing his mission of saving mankind from the bondage of sin, mainly through a temptation to become the political Messiah of Jewish expectations, and to use his Divine power first for his own convenience and then to avoid suffering and death.

The phrase “forty days” was the Hebrew way of expressing a long period of time. We find it used in the recounting of various incidents in Jewish history: a) forty days of rain in Noah’s time (Gn 7:1-23); b) forty days which Moses spent on the mountain with God (Ex 34:28); c) forty days during which the prophet Elijah travelled in the wilderness (II Kgs 19:8). The wilderness was probably a desert in Judea, perhaps the great deserts of Horeb or Sinai, where the children of Israel were tried for forty years, and where Moses, and later Elijah fasted forty days.

The Holy Spirit led Jesus into the huge fifteen-by-thirty-five-mile desert between the mountain of Jerusalem and the Dead Sea so that Jesus could prepare by prayer, fasting and penance for the public ministry which he was about to commence.

The opposition, hostility, and rejection which Jesus experienced were constant temptations for him to use His power as God’s Son to overcome evil. The temptation story depicts Jesus as obedient to his Father’s will, refusing to be seduced into using his Divine power or authority wrongly. Each of the three temptations, according to the Fathers of the Church, represents an area in which humans regularly fail: the lust of the flesh (stones to bread), the lust of the eye and the heart (ruling over all kingdoms), and the pride of life (a spectacular leap from the Temple, testing the power of God and His promise to save Him). In other words, the three temptations of Jesus are the three essential weapons that the devil has in his arsenal to destroy humanity: The first is of appetite (pleasure/materialism) – to change stones into bread; the second is of arrogance (pride/boasting) – to worship the devil who can give power and wealth; and the third is of ambition (power/fame) – to jump from the top of the Temple.

Jesus overcame these temptations through the knowledge of his identity, his purpose, and God’s plan for human salvation. Satan will tempt each of us to doubt God’s love, providence, and power. Here we are taught to follow Jesus’ example and respond to temptation as he did (CCC #2119). Let us also remember that we are not tempted because we are evil; we are tempted because we are human.

During our forty days in the wilderness during Lent, let us pray for the strength to resist the temptations we face.