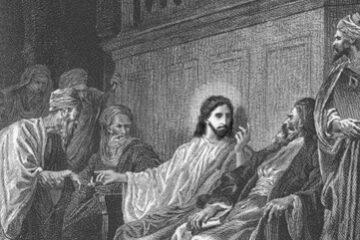 Along with the Law, the Prophets are the dominant theme of the Old Testament. The Power, beauty, and disturbing truthfulness of the Prophets Isaiah, Jeremiah, Ezekiel, and the Minor Prophets take hold of our consciousness, and they come to the fore during our Advent and Lent Liturgies. The Prophet is one who is singled out, elected, called to fulfil a special task of preaching, a ministry of truth. And whilst truth will set us free, it is rarely appreciated by its hearers at the time of telling. The Prophet is asked to reveal what is hidden, to show up hypocrisy and hidden motivation, to direct people towards God. This often involves provoking resentment, anger, misunderstanding, isolation, rejection, and even death. Running through it all, though, is the promise of God’s total support because of this work of prophecy, the proclamation of truth.

Today’s First Reading point us beyond Jeremiah to Jesus. Like Jeremiah, Jesus was consecrated in the womb and sent as a “prophet to the nations” (see Luke 1:31–33). Like the prophets before Him, Jesus too faces hostility. In today’s Gospel reading, the crowd in His hometown synagogue quickly turns on Him, apparently demanding a sign, some proof of divine origins—that He’s more than just “the son of Joseph.”

The sign He gives them is that of the prophets Elijah and Elisha. From their colourful careers Jesus draws two stories. In each, the prophets bypass “many . . . in Israel” to bestow God’s blessings on non-Israelites who had faith that the prophets were men of God (see 1 Kings 17:1–16; 2 Kings 5:1–14). “None . . . not one” in Israel was found deserving, Jesus emphasises. His point isn’t lost on His audience. They know He’s likening them to the “many . . . in Israel” in the days of the prophets. That’s why they try to push Him off the cliff. As He promised to protect Jeremiah, the Lord delivers Jesus from those who would crush Him.

As were Elijah and Elisha, Jesus is sent to proclaim God’s gift of salvation—not exclusively to one nation or people, but to all who realise in faith that from the womb God alone is their hope, their rescuer, their “rock of refuge,” as we say together in today’s Psalm.

Prophecies, Paul tells us in today’s second reading from his first letter to the Corinthians, are partial and pass away “when the perfect comes.” In Jesus, the word of the prophets has been brought to perfection, fulfilled in those who have ears to hear, as He declares in today’s Gospel. Greater than the gifts of faith and hope, Jesus shows us how to love as He loved—to love God as our Father, as the one who formed us in the womb and destined us to hear His saving Word.  This is the salvation, the “mighty works of the Lord,” that we, like the psalmist, are thankful to proclaim daily in the Mass.