This Week’s Good News: The Assumption of the Blessed Virgin Mary (C) 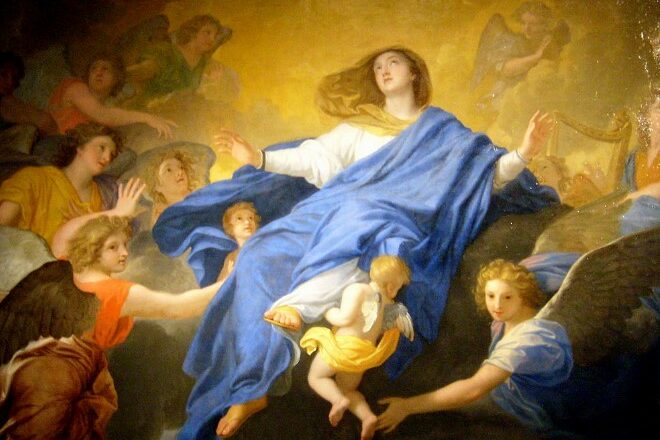 The Feast of the Assumption is one of the most important feasts of our Lady.  Catholics believe in the Assumption of the Virgin Mary into Heaven. We believe that when her earthly life was finished, Mary was taken up, body and soul, into Heavenly glory, where the Lord exalted her as Queen of Heaven. (Catechism of the Catholic Church, # 966).  The Assumption is the feast of Mary’s total liberation from death and decay, the consequences of original sin.  It is also the remembrance of the day when the Church gave official recognition to the centuries-old belief of Christians about the Assumption of their Heavenly Mother.  In the Orthodox Church, the koimesis, or dormitio (“falling asleep”), of the Virgin began to be commemorated on August 15 in the 6th century.  The observance gradually spread to the West, where it became known as the feast of the Assumption.  By the 13th century, the belief had been accepted by most Catholic theologians, and it was a popular subject with Renaissance and Baroque painters.  It was on November 1, 1950, that, through the Apostolic Constitution Munificentimus Deus, Pope Pius XII officially declared the Assumption as a Dogma of Catholic Faith.  On this important feast day, we try to answer two questions:  1) What is meant by “Assumption?”  2) Why do we believe in Mary’s Assumption into Heaven, even though there is no reference to it in the Bible?  “Assumption” means that after her death, Mary was taken into Heaven, both body and soul, as a reward for her sacrificial cooperation in the Divine plan of Salvation.  “On this feast day, let us thank the Lord for the gift of the mother, and let us pray to Mary to help us find the right path every day” (Pope Benedict XVI).

The Magnificat, the song of Mary given in today’s Gospel, Mary acknowledges that “the Almighty has done great things” for her. Besides honouring her as Jesus’ mother, God has blessed her with the gift of bodily Assumption.  God, who has “lifted up” His “lowly servant” Mary, lifts up all the lowly, not only because they are faithful, but also because God is faithful to the promise of Divine mercy.  Thus, the feast of the Assumption celebrates the mercy of God, or the victory of God’s mercy as expressed in Mary’s Magnificat. As the new Eve, Mary shares intimately in the fruit of the redemption and so is assumed body and soul into Heaven.

Mary’s Assumption gives us the assurance and hope of our own resurrection and assumption into Heaven on the day of our Last Judgment. It is a sign to us that someday, through God’s grace and our good life, we, too, will join the Blessed Mother in giving glory to God. It points the way for all followers of Christ who imitate Mary’s fidelity and obedience to God’s will.

This feast also gives us the message of total liberation.  Jesus tells us in John 8:34 that everyone who sins is a slave of sin, and St. Paul reminds us (Gal 5:1), that, since Christ has set us free, we should be slaves of sin no more.  Thus, the Assumption encourages us to work with God to be liberated from the bondage of evil: from impure, unjust, and uncharitable thoughts and habits, and from the bonds of jealousy, envy, and hatred.

Finally, it is always an inspiring thought in our moments of temptation and despair to remember that we have a powerful heavenly Mother, constantly interceding for us before her Son, Jesus, in Heaven. The feast of Mary’s Assumption challenges us to imitate her self-sacrificing love, her indestructible Faith, and her perfect obedience. Therefore, on this feast day of our heavenly Mother, let us offer ourselves on the altar and pray for her special care and loving protection in helping us lead a purer and holier life.